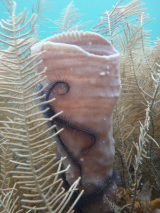 Coral reefs are the most productive and species rich ecosystems in the ocean yet we lack knowledge about the distribution of genetic variation the within and among species, particularly for the sponges (Porifera). Although the simple and plastic morphology of sponges often conflicts with genetic lineages, intra- and interspecific genetic data allow us to reconstruct historical demography and determine species boundaries. Armed with a clear picture of evolutionary history, we can then identify the intrinsic (i.e. molecular evolution, life history) and extrinsic (i.e. environment, geography) forces that influence the genesis of biodiversity on coral reefs. 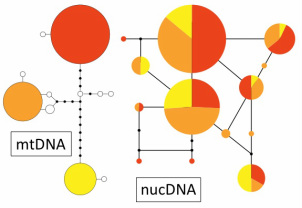 I compared patterns of genetic diversity and population subdivision in the mitochondrial and nuclear genomes of Callyspongia vaginalis over a small spatial scale along the Florida reef tract. Although most individuals fell within one of three divergent, geographically restricted mitochondrial lineages, nuclear alleles did not correspond to either mitochondrial clade or geography. Coalescent simulations and neutrality tests showed discordance in the mitochondrial and nuclear DNA was not the result of incomplete lineage sorting of the nuclear alleles with respect to the mitochondrial clades. Instead, patterns in the mitochondrial and nuclear DNA were consistent with past changes in population size and with sperm-mediated gene flow.  Observations of mito-nuclear discordance will likely become more common as the number of studies using sufficient sequence data from both genomes increases. As this happens, researchers should move towards testing hypotheses about the drivers of discordance, rather than ascribing them to the popular explanation of the day (as has been the case for lineage sorting). To facilitate this shift, I evaluated five common test statistics for their power to distinguish among simulated datasets with various levels of incomplete lineage sorting and developed a procedure by which researchers working on any taxon can statistically test whether mito-nuclear discordance is the result of incomplete lineage sorting using the summary statistics are most informative for their data. Download the manuscripts describing this work here: DeBiasse et al. 2010; DeBiasse et al. 2014. 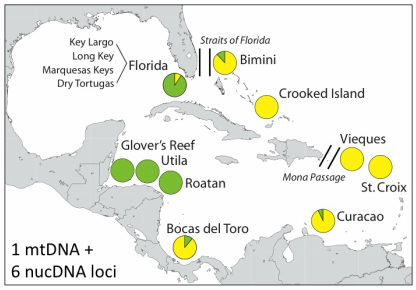 At a large spatial scale across the Caribbean basin, patterns of subdivision in C. vaginalis for the mitochondrial and nuclear DNA were concordant, suggesting that geographic features and habitat discontinuity are important for structuring populations at large spatial scales. Bayesian clustering analyses found C. vaginalis populations were divided west-east across the Caribbean basin with a secondary signal of substructure within regions. Model-based test of species boundaries supported the existence of a cryptic lineage restricted to Central America. Phylogeographic patterns for three invertebrate taxa that live commensally within the sponge also showed a west-east split with a strong break across the Straits of Florida between Florida and the Bahamas. 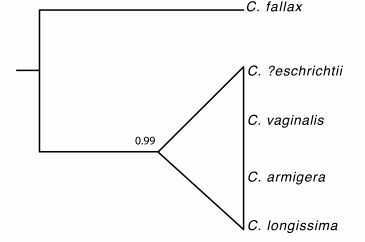 Chapter 3: Discordance between morphological and molecular species boundaries in Callyspongia

Evolutionarily distinct lineages are not concordant with current morphological species designations for seven Caribbean Callyspongia species. For example, while I identified a morphologically indistinguishable, yet genetically divergent lineage in C. vaginalis in Central America, four taxa with different morphologies (C. armigera, C. longissima, C. ?eschrichtii and C. vaginalis) share alleles and genetic distances within these taxa overlapped with distances among them. Model-based methods of species delimitation supported collapsing these four taxa into a single evolutionary lineage. Single-locus gene trees showed C. fallax, C. tenerrima, and C. plicifera were reciprocally monophyletic and genetic distance among these species exceed those within taxa, suggesting good species do exist within the genus Callyspongia. These results highlight the complex relationship between morphology and evolutionary lineage that is likely prevalent in across the Porifera and in many other understudied coral reel taxa with simple or plastic morphological characters. Download the manuscript describing this work here: DeBiasse and Hellberg 2015.